Party Bike arrives to the city of Granada. 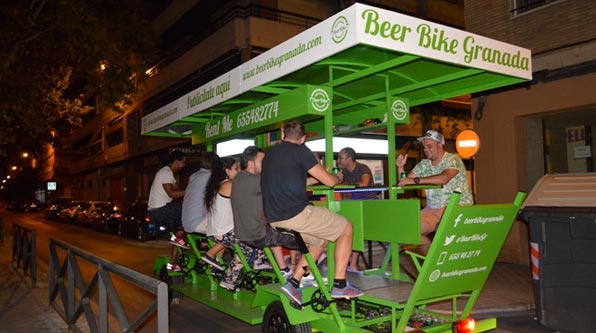 This activity took the majestic city of Granada.
A beautiful city that sleeps at the foot of the eighth wonder of the world, the Alhambra, surrounded by one of the best mountains in Spain, Sierra Nevada, and bathed by the river Genil that is dropped by the famous neighborhood of Albaicin.

Granada, charming, not only for its tourist attraction, also for being one of the main European destinations for many national and international students, Granada has been positioned for 2 consecutive years as the third city preferred by Erasmus students.

We can not forget that one of the strengths of this city is the party, with both student and tourist, Granada, is one of the main places to spend a different weekend. The bachelor parties choose this city for its many charms and activities, and we have the best, the bike bar.

Imagine with some friends on a bike with capacity for 18 people, circulating in the most emblematic places of the city at the stroke of a pedal, with the music of the moment and accompanied by a beer, tintito, coca cola, … being the center of attention of everyone who passes by.

The fun is assured, we have everything ready for your birthday, farewell to soter @ or a simple meeting of friends, plus you do not need to be a large group, as long as you do not mind meeting new people and we mix you with another group .